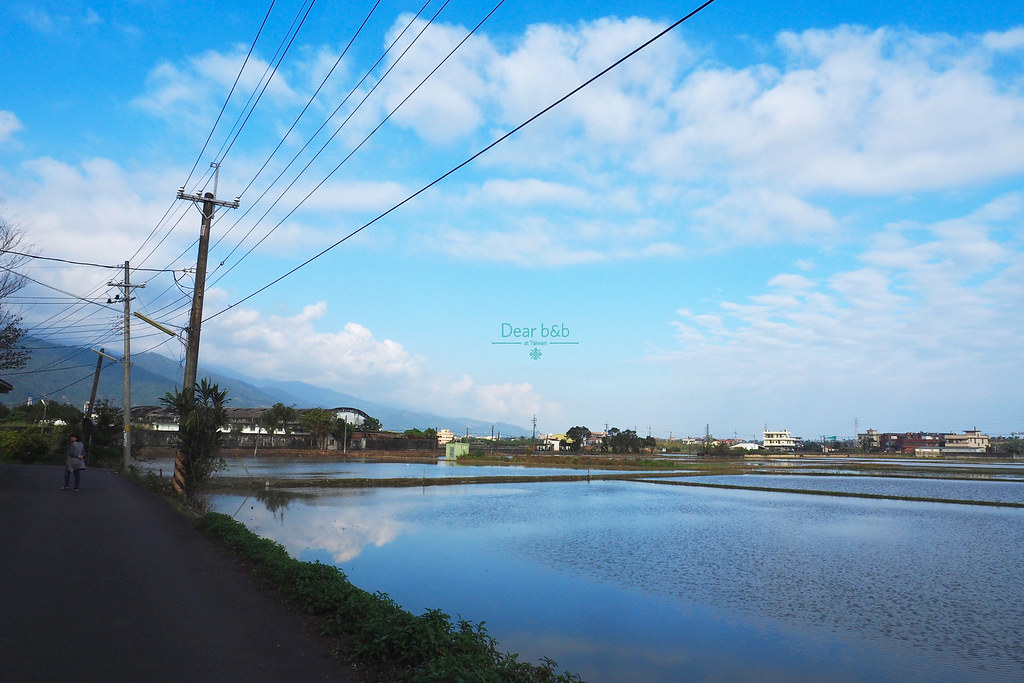 Having passed through the long, dull Xueshan Tunnel, you see the bright sun again as if a rebirth from the dark. You exit the highway interchange and make a turn down a small road into a rural atmosphere rich with the scent of rice paddies. Layers of lush mountains spread out right before your eyes. In the distance, the blue sky and the azure ocean share a vague outline. To say that the enchanting county of Yilan is akin to Taipei’s backyard garden simply doesn’t do it justice. This place could more rightly be described as every traveler’s ideal paradise. In the same way, Taiori is every Japanese-cuisine-loving gourmet’s Shangri-la. 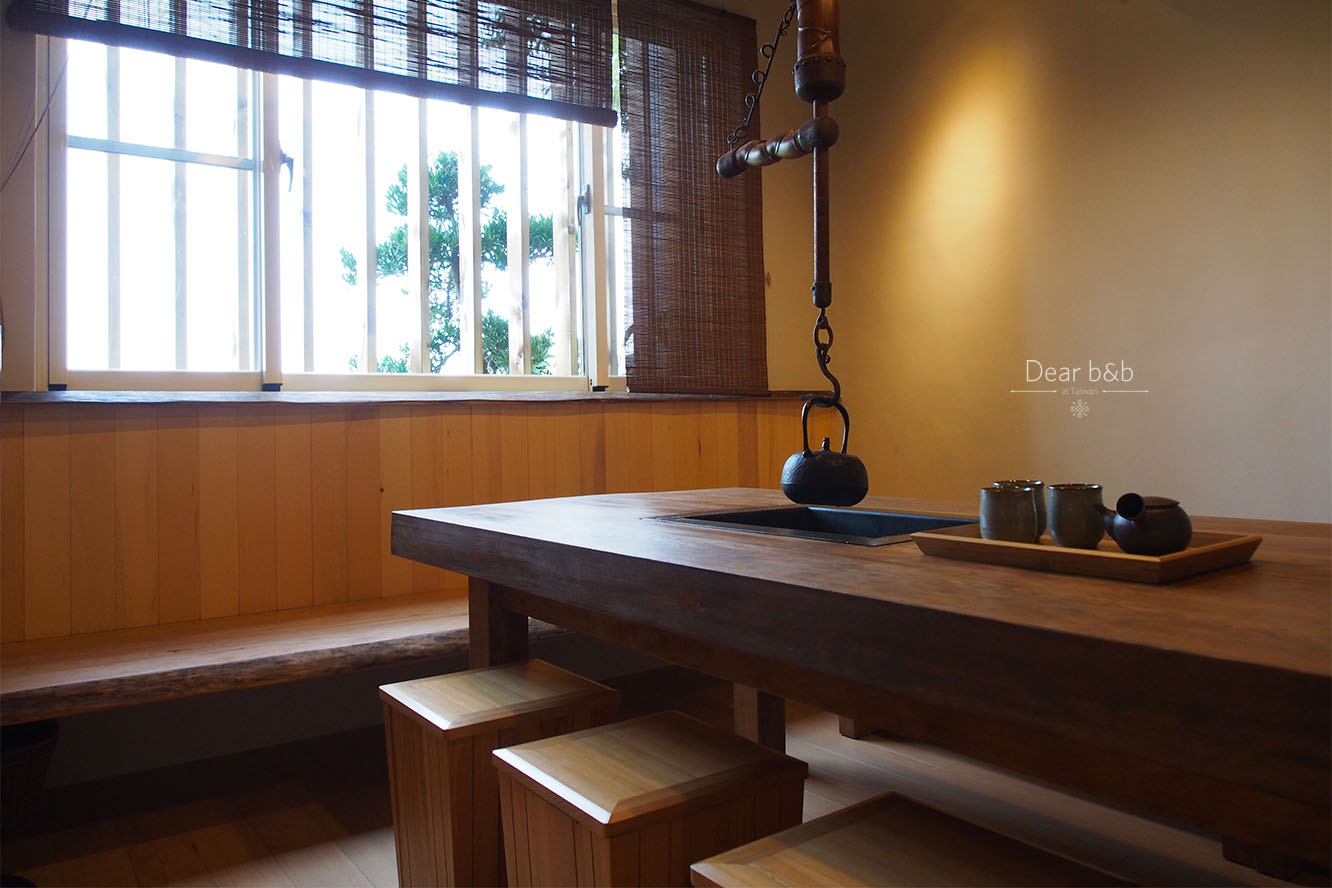 As if visiting a traditional Japanese household

As with every other B&B in Yilan county, Taiori is tucked away beside farmers’ fields, and exudes a generous and friendly ambiance. Even though this is so, it’s difficult to miss the sight of it, with its light gray slate wall and wooden door. To one side of the door sit several bicycles and potted plants. Beside the other cement buildings in the area, Taiori radiates a different kind of warmth.

Opening the doors and stepping forward, you immediately smell the rich aroma of solid wood. Above a long wooden table, a traditional, Japanese-style water kettle hangs peacefully from an elaborate hook over a charcoal burner. A colorful Japanese flag bearing the name of the bed and breakfast hangs on the wall in the entrance. Symbolic in Japan of a plentiful fishing harvest, the colorful red fish leaping into the sunshine between Mount Fuji and a magnificent sea wave seems to represent the feelings of satisfaction and abundance that Taiori hopes to impart to every guest.

Your hostess, Xiao Shan, approaches and greets you in her delicate voice. Her genuine smile gives every traveler the feeling that they have arrived at a traditional Japanese household, and are about to experience the meticulous attention to detail characteristic of the Japanese. 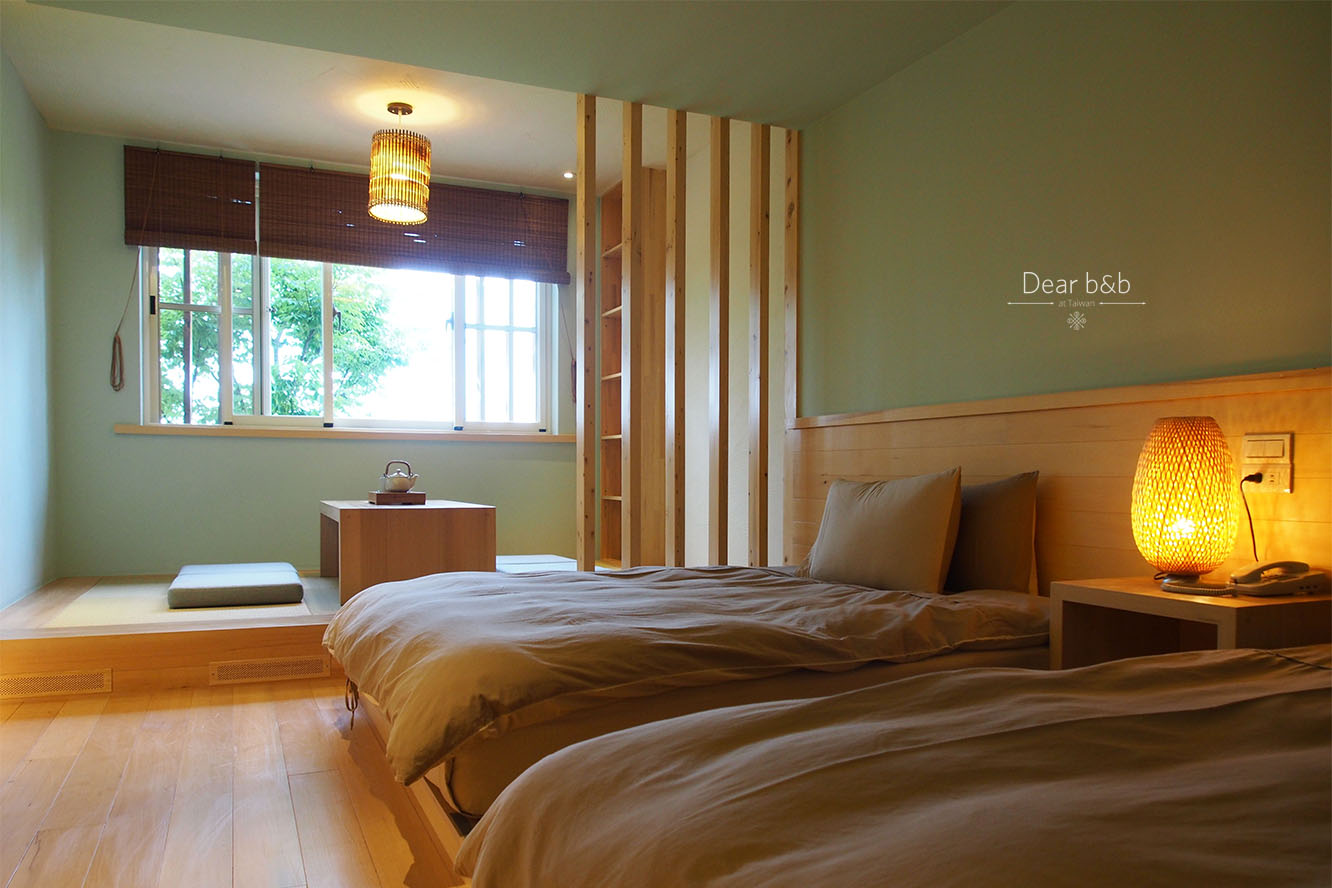 Experience the warmth of slow living

When you arrive at Taiori with its solid wood construction and head upstairs to the second floor, the symmetrical rooms left and right both consist of comfortable two-level spaces. The bedrooms contain soft beds and a full wall of windows overlooking the vast fields beyond. After soaking in the hot spring bathtub, you don a supple bathrobe and sit in the Japanese-style space sipping hot tea and playing Chinese chess. Turning your head, you admire the bright green rice paddies outside the windows. During migratory bird season, black-winged stilts with their long, slender legs can be seen wading slowly through the fields.

The upper level of each room consists of your very own private hot spring spa which, however small, is brimming with character. The spacious hot spring bathtub is large enough for three or four friends to enjoy without feeling crowded. Bathing in the gentle hot spring water of Jiaoxi, while sipping a glass of ice-cold sake wine and marveling at the meticulously manicured Japanese garden outside the floor-to-ceiling windows, you feel elated and content. 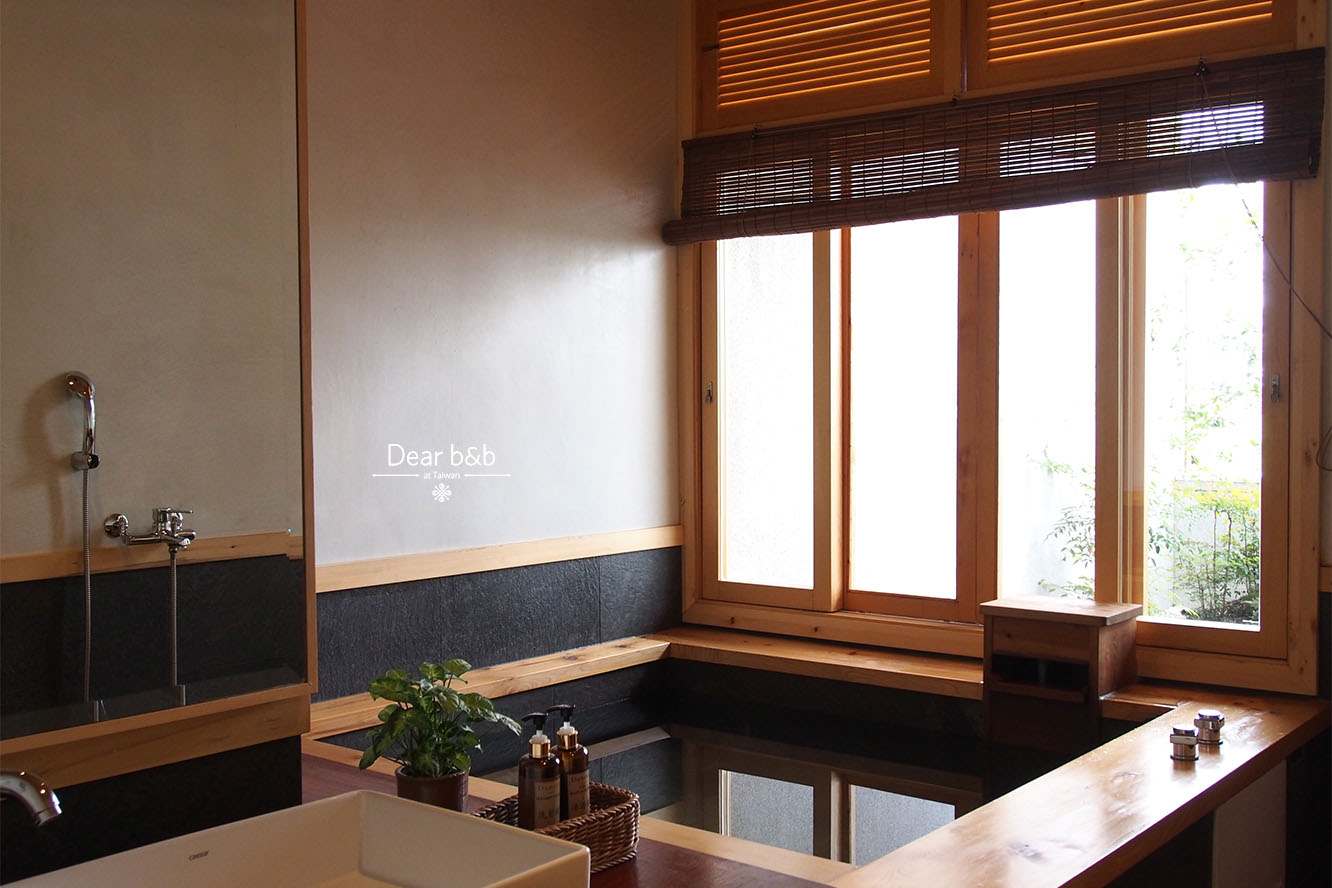 Collect for safekeeping all the delicious memories

For the gourmet traveler, the most fascinating element of Taiori B&B is obviously the sumptuous evening meal. Brother Yo, your host who puts his whole heart into cooking, makes daily trips to the harbor to select the freshest fish, always striving to prepare a unique seasonal menu just for you. In early springtime, you will be served with appetizers consisting of Yilan’s famous smoked duck and handpicked seaweed. Japanese Jack mackerel, Oriental tuna, and sweet prawns caught fresh that evening are prepared into sashimi, allowing you to savor their most authentic flavor. Precious harlequin shrimp and red big-eyed fish are served lightly salted and grilled to perfection to preserve their delicate freshness. The seasonal main dish is fried on a pottery skillet: anglerfish liver, testes, and maw served with a rich variety of vegetables and mushrooms, and paired with a clear soup and light brown Japanese soy sauce. The sweetness of the veggies perfectly complements the savory fish in mildly salty sauce to produce an indescribable array of flavors. The meal is followed at last by a bowl of miso soup also flavored with seafood but prepared differently than other dishes, and a homemade kumquat slushie that makes you feel reluctant to admit this feast is soon to reach an end. Although tonight’s meal is not prepared using fancy techniques, it employs the authentic flavors of unadorned ingredients and leaves you with an unforgettable dining experience.

After a satisfying feast, out of curiosity, you ask Brother Yo if it’s a tiresome job to prepare these plentiful meals day after day. He shakes his head and answers that operating a B&B gives him the best reason to indulge in his passion for cooking, woodworking and coffee making, and he never tires of it. You see the enthusiasm in his eyes and suddenly realize that it is those sincere smiles on visitors’ faces when they bathe in the hot spring, appreciate the breezy blue sky, and enjoy a seafood meal here that ignite Brother Yo and Xiao Shan’s passion like the Japanese-style water kettle filled with steaming tea constantly heated by the charcoal underneath, both modest and warm. 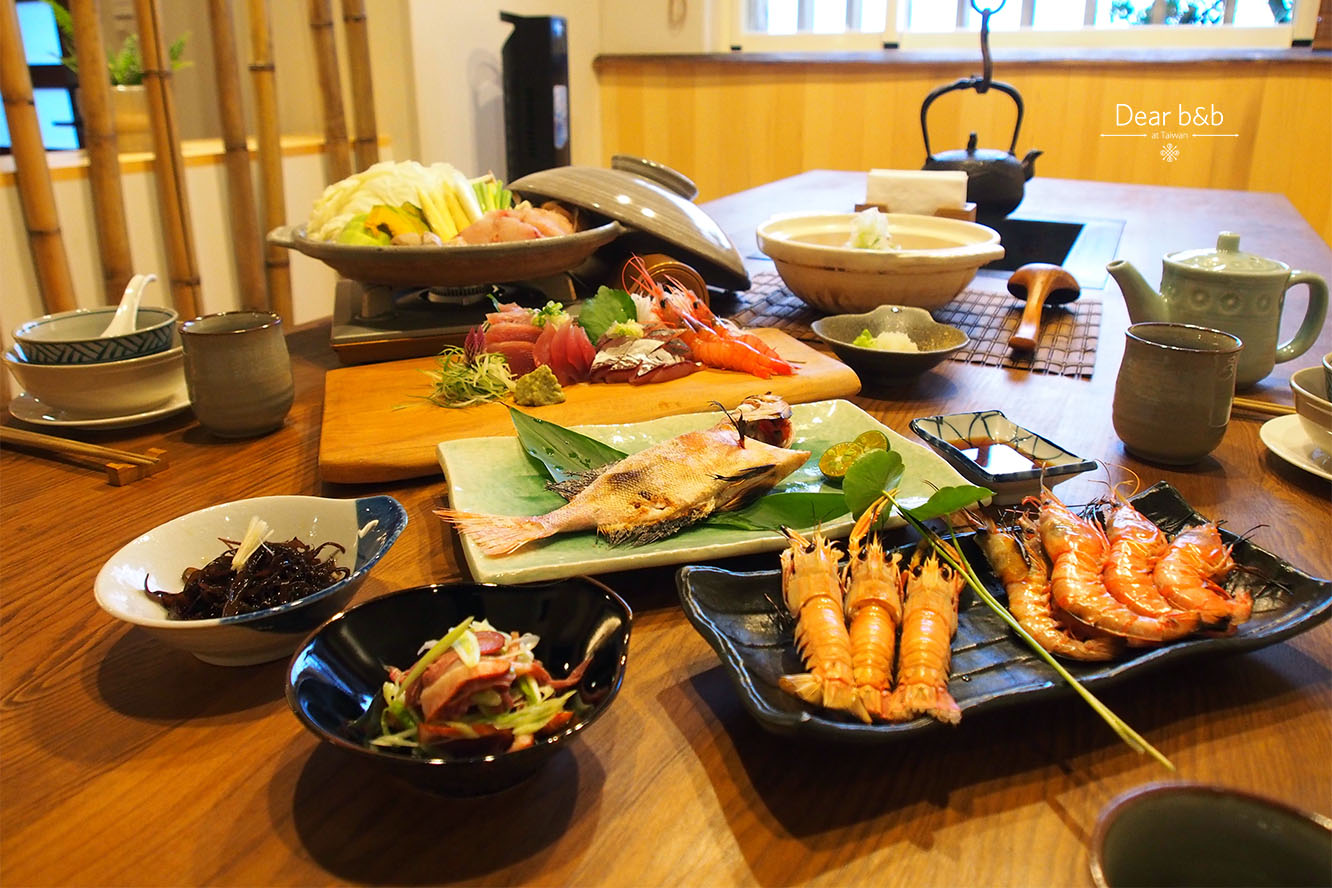 “Come try the seasonal striped bonito and mackerel!” Brother Yo appeared from the kitchen with a plate of freshly-cut sashimi, while Xiao Shan approached with some steaming tea. “Feel free to help yourself to some local kumquat cakes and preserved fruit.” Their smiles were as uplifting as a warming fire and lit up the wood-scented room. In operation for nearly nine years, Brother Yo and Xiao Shan have not lost their passion for life. Through the hot springs of Jiaoxi and their deliciously sincere intention, they take care of the heart of every traveler. Between blue sky and green fields, they have created a happy, safe harbor, providing you with relaxation and peace of mind. 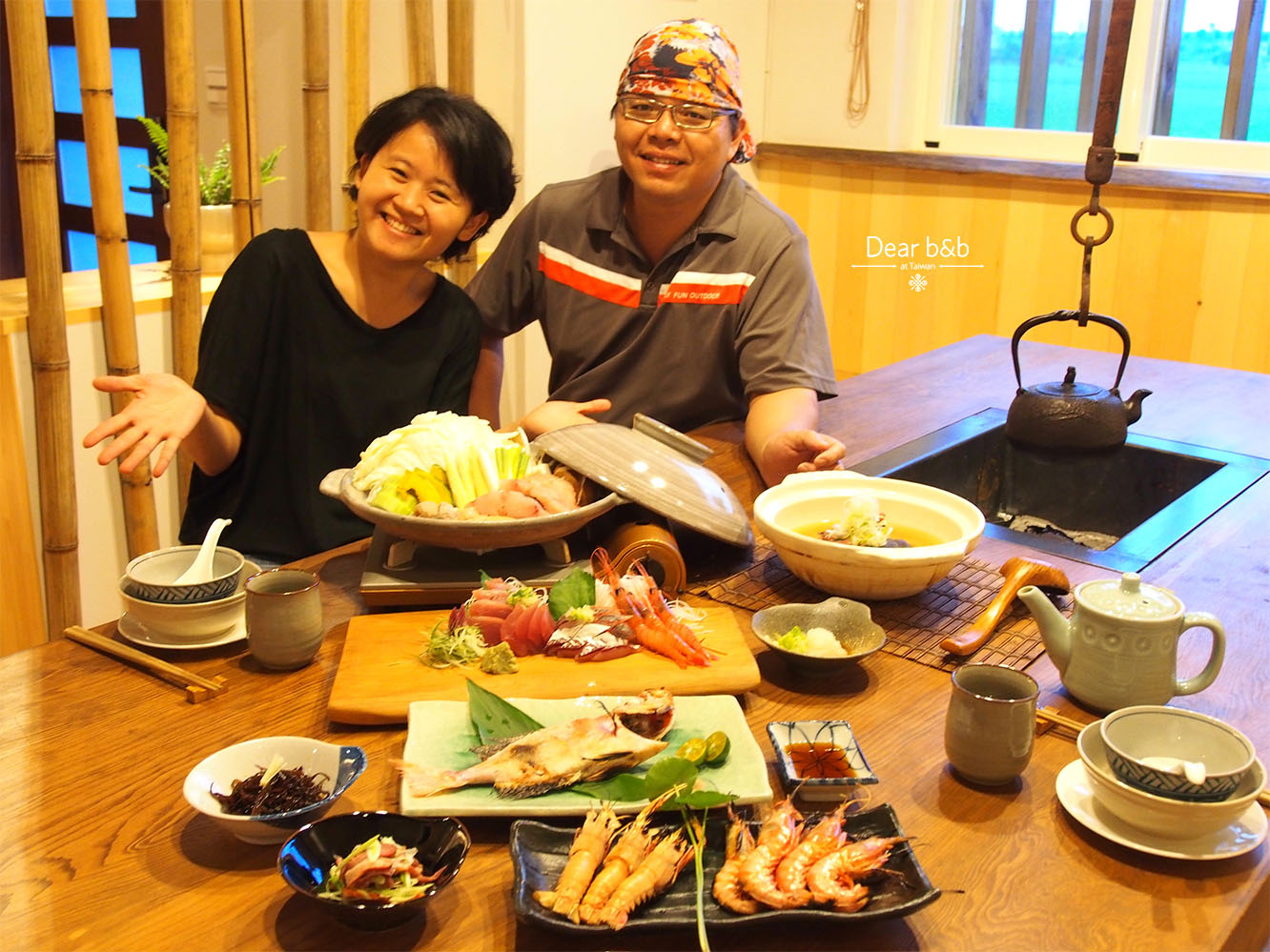 Meeting a life partner who also loves nature, in Hualien

Although both graduated from National Taiwan University and studied their masters at National Dong Hua University in Hualien, Brother Yo and Xiao Shan did not meet each other until they joined The Society of Wilderness, an NPO devoted to environmental protection. Having grown up in the Jiaoxi Township of Yilan County, Brother Yo’s heart has always adored nature. While at university, he majored in veterinary medicine. However, he later found out that instead of pursuing a veterinary career at a big-city animal hospital, walking into nature and spending time with wildlife sounded preferable to him. As a result, when pursuing his master’s degree, he decided to make the Shihtiping coast his base, seizing the chance to sail out to the ocean and do cetacean research, and joining The Society of Wilderness where he eventually met Xiao Shan who was from Taipei.

“When I first met him, I immediately admired his capacity for seeing things from different perspectives and figuring out better solutions,” Xiao Shan recalled her first impressions of Brother Yo. Having studied Japanese at university, Xiao Shan joked about not having any clear plans for life or career. She is not a typical metropolitan girl, always seeking adventure, but rather a placid soul that longs for nature. “It seems to me that there is ever a vague light leading me forward in some direction.” It was her easygoing soul that offered a coastline for the drifting waves and a direction for the expedition ships. 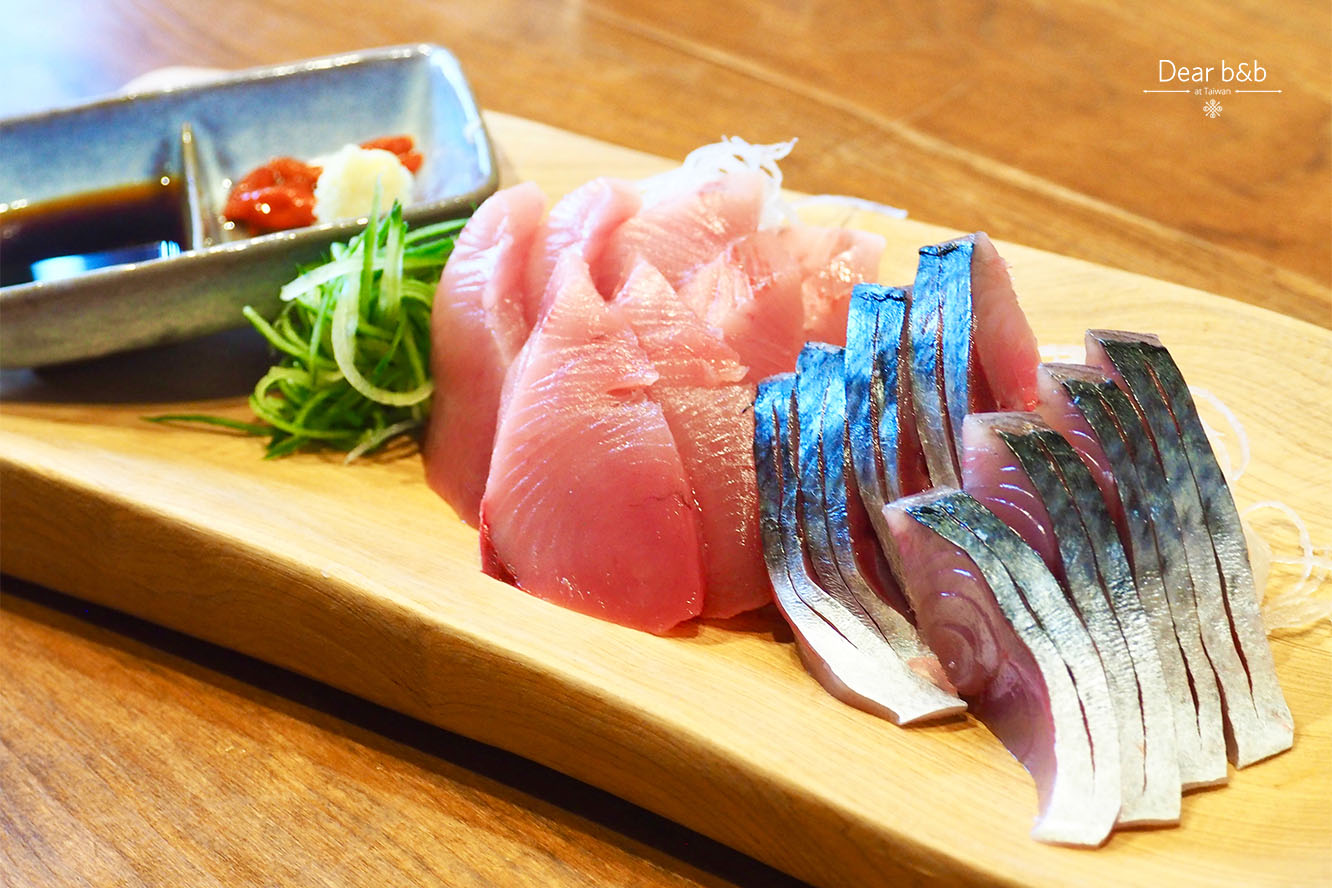 A cooking soul: from restaurant to meal-included guesthouse

“Having my first taste of freshly-caught fish on a boat was a shocking experience!” Having grown up a food-lover, Brother Yo enjoyed following his mother into the kitchen when he was young. Later, he had the chance to follow fishing boats out to sea and learned the bold way of savoring raw, freshly-landed fish. He eventually seized the chance to open a restaurant beside Shihtiping Harbor, teaching himself the knowledge of seafood preparation as well as learning from indigenous chef friends. Even today, as the owner and operator of Taiori B&B, his eyes still shine as he talks about the seafood he brought back from the harbor, as if the ocean is a vast cosmos with countless surprises for him to explore. “Cooking seafood is like winning a prize — always full of excitement!”

“Even though Hualien was my original inspiration, my heart has always belonged to my hometown of Yilan,” said Brother Yo. Despite the fact that his restaurant in Hualien received ample recognition, he eventually decided to move back to where he calls home. With his wife Xiao Shan’s support, Brother Yo’s exacting tastes realized that no other B&B had yet combined the local seafood of Yilan with the hot springs for which Jiaoxi is famous into a single space. So they took the initiative and constructed just such a landmark restaurant guesthouse, offering accommodations with two meals. Their creation is now in high demand. “There’s no reason for customers not to come, as long as we provide comfortable accommodations and delicious food,” Brother Yo proudly states, having maintained the confidence to succeed since the very beginning. “Our original motivation was to allow people to travel to Yilan for a vacation, to eat local fish, and discover just how delicious Taiwanese fish is!” If Brother Yo is a boat bearing the sail of cuisine, Xiao Shan would be the paddle leading the expedition ship back home from the far reaches of the Pacific Ocean. 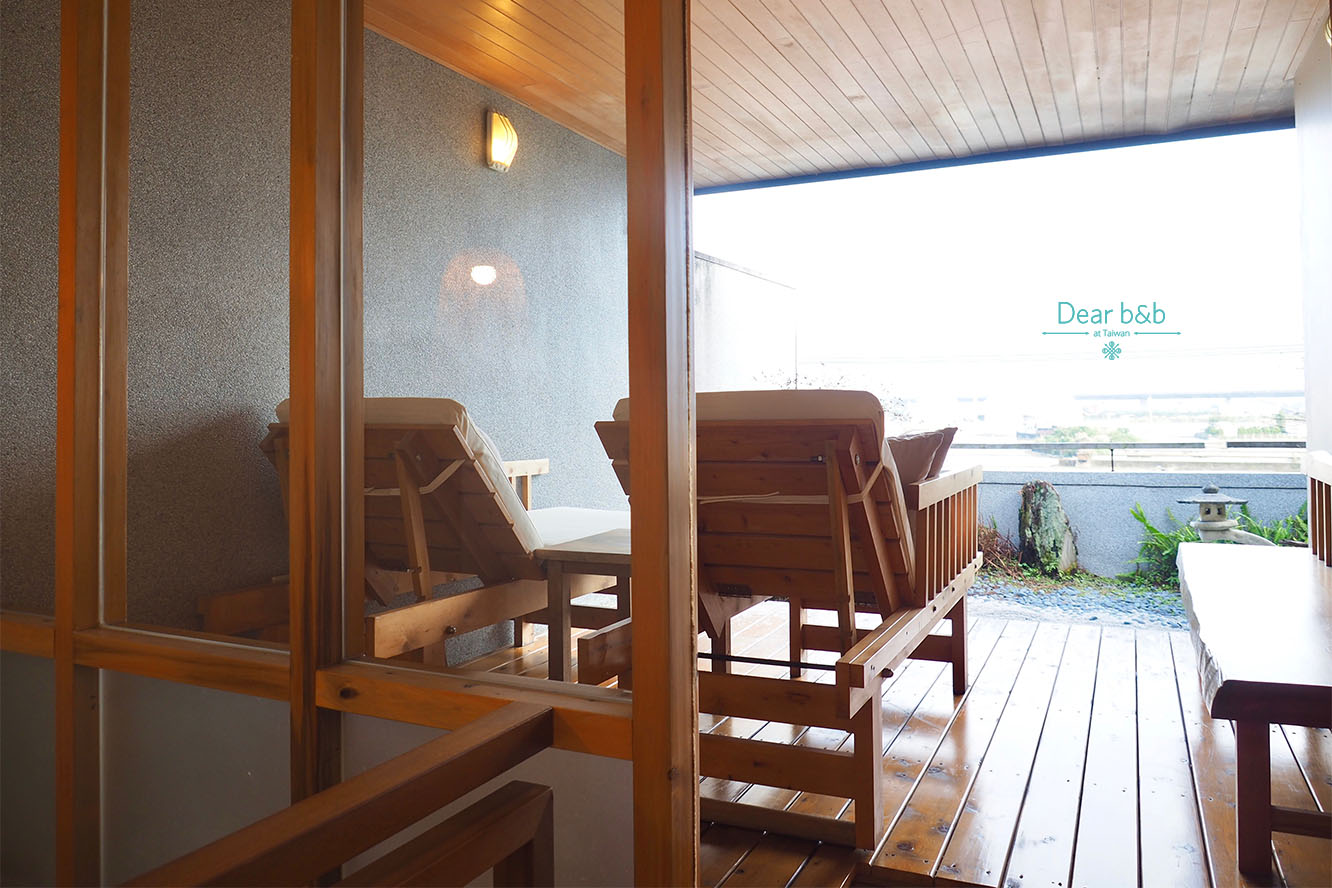 Passion for cooking and life

“When you put your whole heart into something, no matter how difficult each phase of it may be, you will eventually be rewarded by an enormous sense of achievement after you’ve conquered your obstacles!” said Brother Yo. As the second site of Taiori has opened and more young blood has joined the team, he and Xiao Shan now have a more flexible schedule that allows them to maintain a work-life balance as well as their initial passion. Over time, seeing weary guests who’ve traveled from afar arrive at their B&B and leave refreshed and energized is still the proudest moment of each day for them.

When asked about being both married and work partners, and if they ever disagree and fight with each other, Xiao Shan answered, “For sure! But my temper just vanishes when he makes delicious late-night snacks for me.” Brother Yo also responded with laughter, saying that he might one day publish a cookbook called “100 Late-Night Recipes Especially for Your Wife.” In fact, Brother Yo’s food not only makes his wife happy, it even earned him the approval of Xiao Shan’s parents before they married.

While we enjoyed delicacies offered to us by the Pacific Ocean and listened to Brother Yo share his stories about cooking and woodworking, Xiao Shan further commented, with that smile of hers, that what we see here is their humility before nature, their passion for cooking, their ideals inspired by daily life, and their aim to give back to life. All of a sudden, the thought occurred to us that happiness is like a ship piloted by sailors with a shared destination, sailing fearlessly forward into tall waves towards the warm harbor they call home.