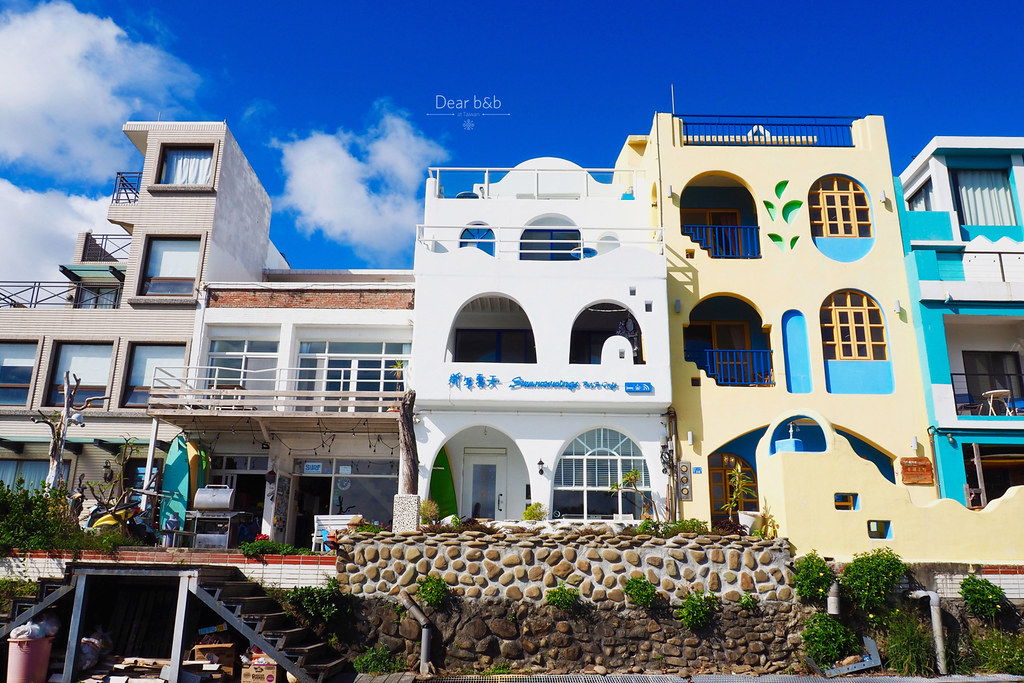 This summer, as the fast life hasn’t caught up with the tail end of the season, why not respite from the commotion of daily life? No need to fly across different time zones, under the brightest sun, just come to the boundless bay in the ever-warm southern island. Heading south all the way to the azure sea with the snow-white surf accompanied by the refreshing sea breeze blowing from the far end of the coastline. With a heart longing for freedom, you land on the bright, pure white building with the memory of that summer. 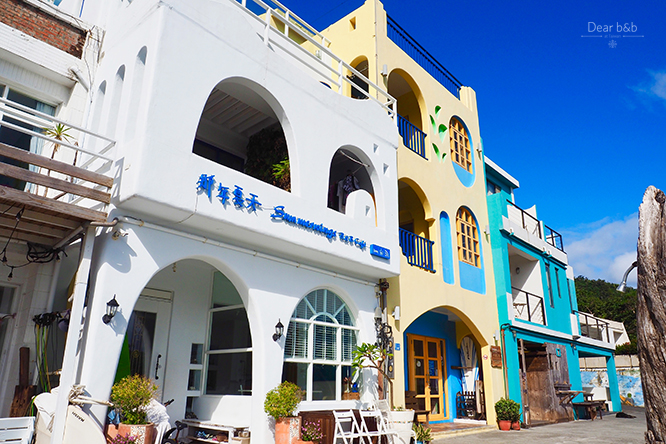 A Laid-back Vacation as if Were in the Mediterranean

Arriving at the popular surfing destination Jialeshuei, under the dazzling sunshine of southern Taiwan, a pure white building comes into view as you go up the small stairs by the highway, sparkling under the intense rays of the sun. The surfboards by the entrance evoke the chill of blue and white waves. Pushing the door open, sofas with blue stripes and white display cabinets invite you into the elegant vacation mode. Dark or light wood color wall shelves are like the windsurfing boards dotted on the Mediterranean sea, while the decorating pebbles and shells at the corner tell the story of the ocean. The breezy melody of Bossa Nova circles around your ears, along with the warm sunlight streams in through the window, forming the light and airy lobby space.

In the afternoon at Summerwings B&B, you can pick up a surfboard and run into the brilliant water of Jialeshuei, or prepare the afternoon tea in the well-equipped large kitchen of white tone. Or perhaps, just do nothing and loll around on the lounge chair in the yard, enjoying the laid-back vacation in southern Taiwan in the company of sea breeze and sunshine. 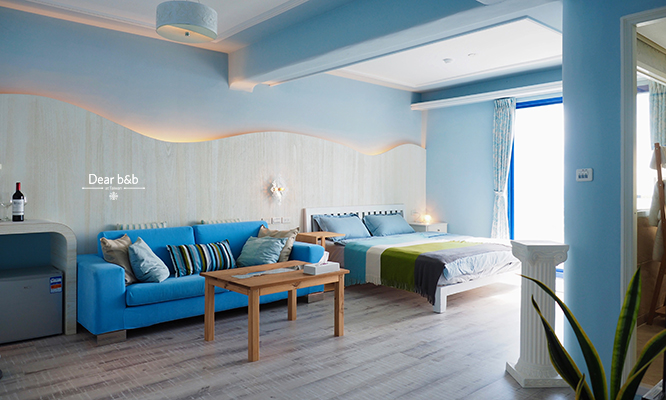 Embraced by the Azure Ocean with Twinkling Stars

Ascending along the winding white stairs, you push open the door to the Sunny Sea-view Quad Room and go up to the split-level. As you step onto the top stair, you are struck by the sudden appearance of the sea beyond the glass fence on the balcony. Lounge chairs sit side by side on the extended balcony for you and besties to relax and chill. Over some beers, your sun-kissed mood is surrounded by the azure sky and vast ocean. The Breeze Sea-view Double Room on the second floor enjoys the breeze coming off the sea. Its sky blue scheme and the deep blue of the ocean beyond the balcony complement each other, composing your wonderful vacation time. Or, you may stay in the romantic Starry Sky Sea-view Double Room with your lover. Soaking in the bathtub under the sky full of stars with some red wine prepared by the hostess brings your hearts closer. The night seems to never end while you exchange secrets of happiness.

At Summerwings B&B, as long as the sunlight is still hot and the sea breeze is still warm, you may enjoy the passionate accompaniment of the sky and the ocean. Here, each room presents you with windows to the azure vista and space of contentment. When you throw yourself onto the bed and fall asleep, the ocean would be there, and the unchanging sounds of waves roaring will guard your dream with the twinkling stars. 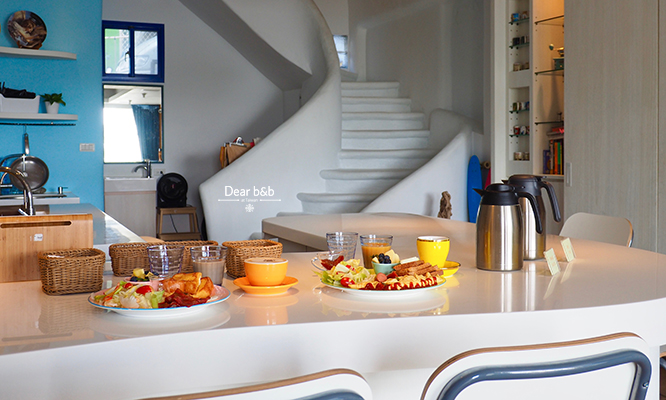 Collecting the Pleasant Memories of That Summer

In the morning, the sunlight sneaks into the room like a child and shines on you, saying “good morning!” in the most passionate way of southern Taiwan. The hearty breakfast is prepared by the hostess Grace every day: the salad with seasonal fruits delivers the fresh sweetness for you; crispy toasted bread with slices of the mozzarella, an over-easy egg, and some bacon, recharging you with all-day energy. Sit by the window closest to the sea, sip over a cup of cappuccino after the meal, immersing yourself in the peaceful morning.

With a full stomach, go right to the beach across the street in your flip-flops and enjoy the cool water of Jialeshuei! Along the beach, you step through the shallow water, soaking all the memories of that summer in the blue sea. From now on, you would return here every midsummer, collecting all those memories of chasing after freedom washed ashore. Happy and content, the memories would shine afresh again after drying under the sun.

When we first stepped into Summerwings B&B, the hostess Grace’s accommodating and friendly greeting is like the cool sea breeze, contrasting with the blazing sunshine outside and blowing away the steaming heat on our shoulders. Wearing a casual T-shirt and a pair of shorts with her long brown curly hair parted on the side, a seemingly quiet woman, she actually bore a distinctive personality and full of ideas. Sharing her journey with us, her tender smile exuded the unchanging enthusiasm and persistence in life and freedom. 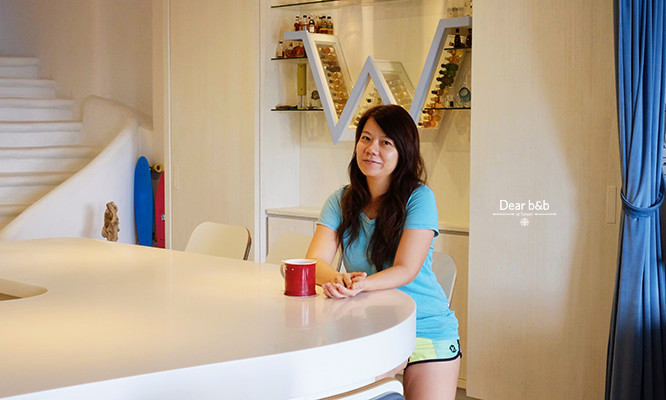 The Free and Soaring Soul

Grace’s impulse to break through the barriers stemmed from the yearning for freedom. After college, the wanting to escape from the urban environment that polluted her body and soul propelled her to leave Kaohsiung for Hualien with little baggage. As she flapped her wings, it led to a seven-year-long unfettered flight. When asked if she was ever worried about the difficulties on the way of the adventure, the sparkles in her eyes just told us that, rather than an impetuous decision, it was a determined flight with faith. She said: “I just embrace the spirit of freedom wholeheartedly, and I always carry out the ideas emerging in my mind right away.”

When speaking of the romance between her and her husband, Grace laughed and said that, perhaps because of her stubbornness, she didn’t alter herself a bit when being in love. At the beginning of the relationship, she even asked her then-boyfriend to show his ID for verifying. The two met in Hualien and took the wedding vows just after they went steady for half a year. As two freedom-loving people, they bumped into some ups and downs in the marriage, but they also worked together to seek the balance in the married life. “Marriage is a process of adjusting and supporting each other, you would have to know what kind of life you want and try to work it out.” As for Grace, instead of fiery love and dramatic break-ups, slowly forming a genuine companionship would be true happiness. 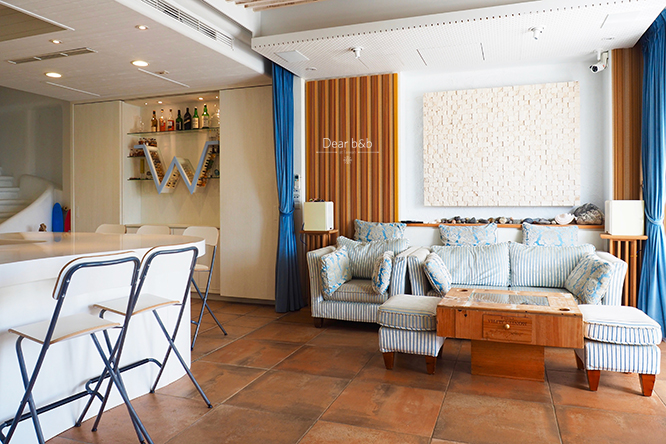 Build a Home of Love and Dreams in Kenting

To open up a b&b in Jialeshuei, Kenting was actually realizing the dream of her husband. They met with this old building by chance, which was not so far from the azure sea nor overly crowded with tourists, thus they decided to bring the image of a pure white ideal building into reality. Grace said with a smile, that her husband, who was in the military, managed the housework in a more meticulous way than herself. Not only did he hand-crafted wooden furniture, but he also learned to cook diligently. Due to his occupation, he couldn’t live with his family, but the house they built together would always be his home of happiness.

Recalling the past of raising kids without her husband around, Grace had this tender and happy look with motherly love. “You have to be a mother to learn how rebellious you were in the past!” While taking care of her children, she has always reflected on herself. Although she was strict about the kid’s lifestyles and manners, she would never be overly protective when kids were faced with choices and self-exploration. From the way she talked about her kids, we all felt deeply that, with her firm love and accompanying, Grace hoped for them to find the skies of their own to fly, just like their freedom-loving mother. 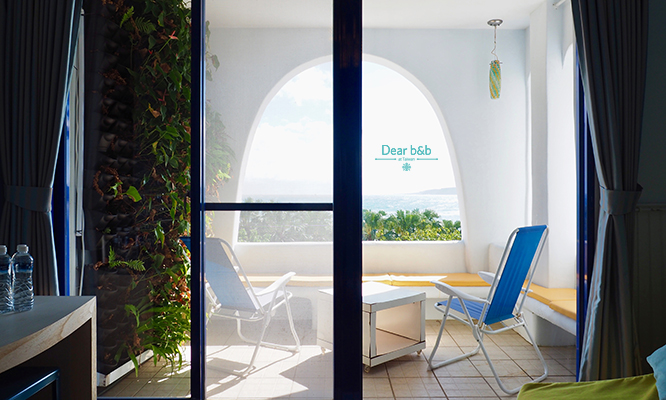 “We all have to learn to lead a life with a life-long purpose. On the road of life, we should not gaze at each other, but look towards the same direction.” In the future, Grace said she may take the kids to Kaohsiung to study, and her husband may return to Kenting after retiring and spice up life with his love for cooking. Even in the face of countless choices at different stages of her life, she still knows well what she is longing for in the future. Wherever she goes, she will surely lead a cozy life that she depicted in her mind that summer and embrace the sky of freedom above the sunny beach.

From determinedly leaving home to finding her love of life, and returning from the eastern to southern Taiwan, Grace has flown over an unexpected life with ocean blue. In Jialeshuei, where waves whispering with ever-summery sunlight, she and her husband eventually built an ideal life in the pure white house, shining with the warmth of love, this is the place called home.