ISSUE 05
Wanna Have One Every Day! A Sweet Surprise of the World-Famous Taiwanese Bubble Milk Tea

“What is your favorite shop for bubble milk tea?”

When tapioca balls meet milk tea, a mouthful of surprising texture and fabulous taste is created!

We begin with the diverse creations it has inspired in the boba scene, explaining the phenomenon of lengthening queues

it has created in Japan, Korea, and other countries, and offering our own sweet pocket list for you to chew on.

“So chewy! I wanna have one every day!” Tasty bubble milk tea, also known as pearl milk tea, is a product of incidental innovation. It has not only raised a sweet wave around Taiwan but also gone viral worldwide. Thousands of Japanese and Korean girls upload photos of bubble milk tea on Instagram, receiving large numbers of “likes.” The tapioca balls, or pearls, look crystal clean, tasting chewy and sweet; when pearls are paired with milk, the variation they present—the color gradient and the pattern of brown sugar—can be both delicious and dazzling. This special issue will reveal our pocket list and stories about this addictive beverage. 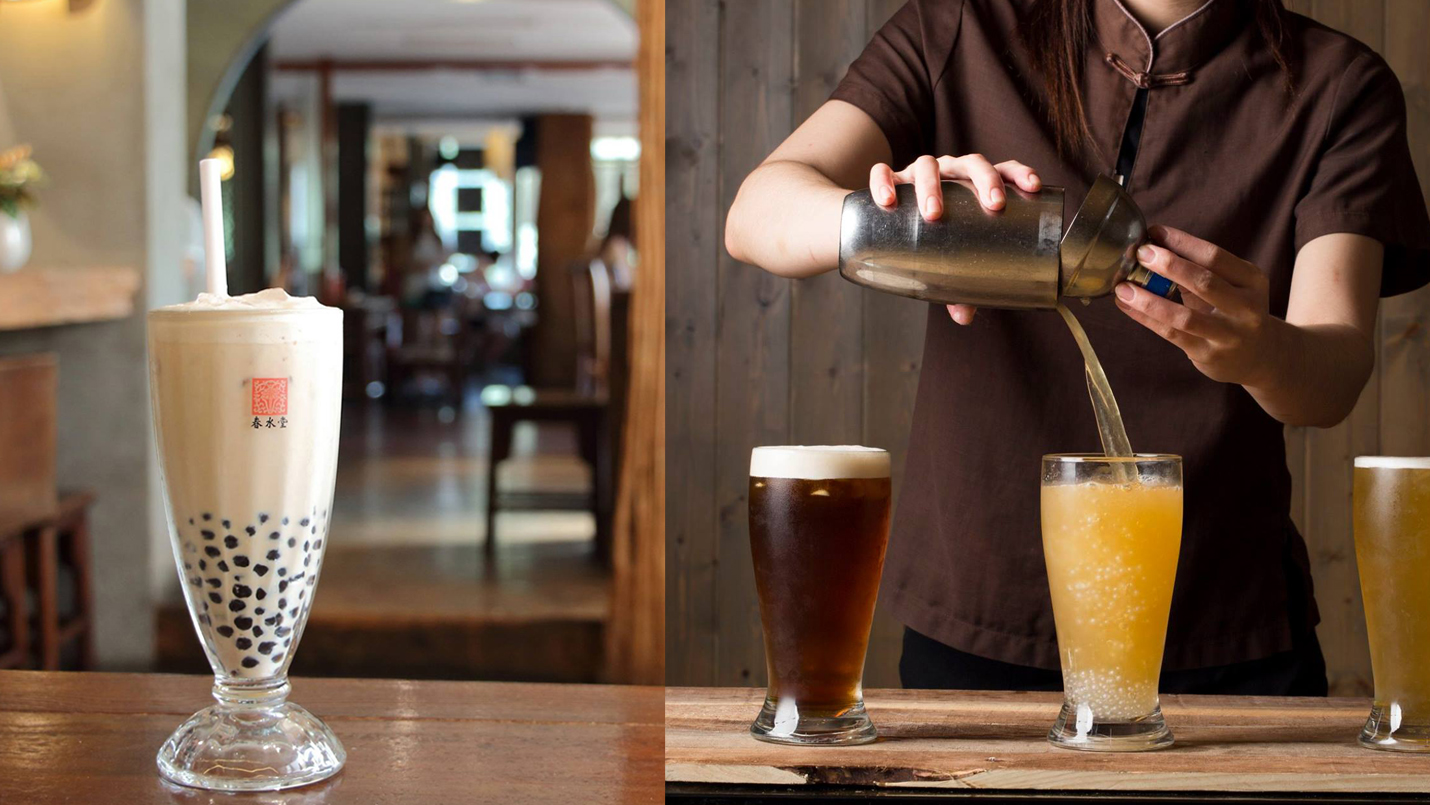 The Birth of Bubble Milk Tea: Pearls and Bobas, The Delicious Diversity of Tapioca Balls

The origin of bubble milk tea—this delicious miracle—may be traced to two major tea shops: Chun Shui Tang in Taichung and Hanlin Tea Room in Tainan. In the mid-1980s, when boba shops flourished on every street corner in Taiwan, these two shops coincidentally chose to add tapioca balls to milk tea, inventing the first Pearl Milk Tea.” Chun Shui Tang’s Pearl Milk Tea contained tapioca balls made with brown sugar and was named after the image borrowed from the lines in an ancient Chinese poem—“pearls in various sizes gliding down to a jade plate.” Meanwhile, Hanlin Tea Room at first used white tapioca balls, and the pearl-like appearance contributed to the name of this drink. Later, Hanlin Tea Room used both brown and white pearls, adding a colorful face to pearl milk tea. After this first offering from two beverage pioneers, pearl milk tea has become not only a necessary part of existence for many tea shops but also one of the favorite boba in Taiwan.

Besides these classic beverages invented by Chun Shui Tang and Hanlin Tea Room, pearls have also taken on a variety of forms in different phases, from the classic small tapioca balls to the big, plump and chewy “boba.” The renowned “boba milk tea” was thus born from this wave of beverage innovation. Gradually, a consensus has been reached that the smaller ones are called “pearls,” and the larger ones “bobas.” Recently, the bobas have become more mainstream in most boba shops, while different variations of pearls continue to hit the market. For example, the white pearls with elegant names such as “crystal” and “white jade,” and colorful pearls which are popular among young girls, have led to an interesting phenomenon where in different boba shops each offers their own version of bubble milk tea. 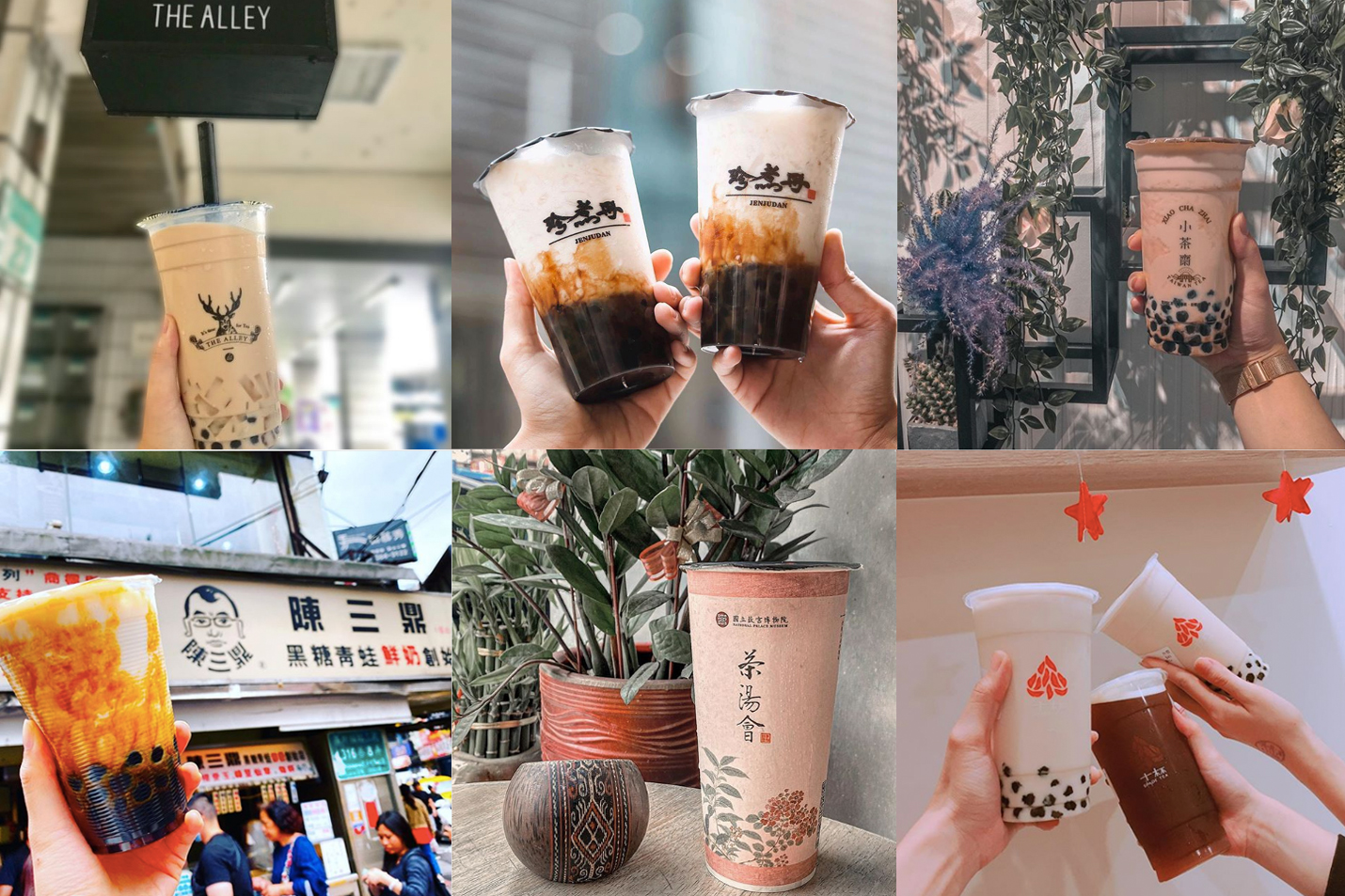 The rising awareness of a healthy diet and the emergence of innovative flavors has changed the bubble milk tea world once again. The texture of pearls is no longer the focus; instead, ingredient combinations and its presentation are the concern. The change initially happened to the recipe of milk tea. Milk tea can be made from other kinds of tea than black, such as green tea, light oolong tea, and Tieguanyin. Principal representatives are the Tie Guan Yin Tea Latte of TP TEA whose milk tea beverages are widely enjoyed, and Honey Puer Pearl Milk Tea in the secret list for regular customers in Ching Shin Fu Chuan Tea Station. Besides, the other main ingredient—milk—has also undergone a revolution: from tea whiteners to milk. Gong Cha used milk to devise a drink with thick, salty-sweet milk foam on top of tea. Other boba shops use the terms “fresh milk tea” or “latte” to distinguish two kinds of milk tea and offer customers the choice of tea whitener or milk. Moreover, some shops featuring milk drinks, such as Milkshop, make the flavors of bubble milk tea even more diverse and refined.

One of the current favorites on Instagram, which first began in Taiwan and then spread to Japan and Korea, is bubble milk tea with gradient colors. Then “brown sugar bubble milk” with a tiger-striped pattern began to gain the attention because the ripples of brown sugar in a transparent cup contributed to lovely and attractive aesthetics. Chen San Ding in Taipei is the early representative of this extremely sweet brown sugar bubble milk. Younger shops such as Truedan, Tigersugar and Xiao Cha Zhai, are also making waves in Taiwan. Afterwards, Tigersugar opened branches in major cities in South Korea, bringing the trend of brown sugar bubble milk to the attention of young Korean girls. This year, The Alley Teashop went viral in Japan, being a big hit among people of all ages. Some boba shops started to imitate The Alley’s deer logo, featuring the name of Taiwanese bubble milk tea; well-known chain stores such as Mos Burger and McDonald’s also began to sell bubble milk tea. Even popular dishes such as pancakes, donburi, and ramen, were combined creatively with pearls, the creation of an entirely new cuisine which demonstrates just how strong this craze of bubble milk tea in Japan is.

In Taiwan, bubble milk tea has become established as an irreplaceable classic. At first, most well-known tea shops were in Taichung and Tainan. Afterwards, some other outstanding choices from different areas in Taiwan popped up. For example, Spade Tea is a shop where customers can choose the texture of their milk (creamy or smooth) to make their favorite tasty bubble milk tea. World Tea House at first was a boba shop near Tamkang University where people could have drinks in-store or take them to-go, and later opened branches in Taipei, Taichung and Chiayi. Extremely Generous Black Sugar Lady Grey Milk Tea with crushed ice, also the signature drink of World Tea House’s owner who likes milk tea, is uniquely surprising and is liked by all Dear b&b staff. Tredecimber in the East District of Taipei has a beautiful name, and the shop is full of the luxurious scent of tea. Cloudy Pearls, their signature drink, will be the first choice for those who enjoy sweet brown sugar bubble milk. “Tea, Floating Cloud” is also highly recommended: the combination of white osmanthus pearls with light sugar and milk tea can definitely satisfy those who favor strong tea. In Cha in Taitung not only receives positive reviews on the Internet but was also unexpectedly discovered by Dear b&b staff when visiting Taitung. They apply local Taitung Red Oolong to make their Red Oolong Pearl Latte, which is worth trying if you ever visit Taitung. A cup of tasty bubble milk tea can not only cure your tiring heart, but also provide a sweet everyday secret craving which makes trips even better!

The daily craving, the bubble milk tea, is not only sweeping through Japan and Korea

but also an unavoidable Taiwanese delicacy.

Traveling around Taiwan, we search for representatives of tasty beverages in various spots and

to offer travelers the ideal daily life with proper amounts of sweetness and warmth.

A Design Lodging on the Outskirts of Taipei｜NK Hostel

Today, instead of visiting popular hotspots, we come to the outskirts of the bustling city, setting foot on this rest stop, which is as perfect as a refreshing drink made with the perfect ratio of ingredients. It meets the needs of all sorts of travelers, helping to realize the ideal life you have longed for with its everyday aesthetics. NK Hostel, your Taipei residence in transit, a traveler’s roadside paradise.

Like a cat, the sunlight crawls quietly into Xinyi Street, slowly wanders along in a laid-back way, and takes a nap in front of a house. With a light-hearted mood, and carrying cold beverages, I look for the familiar atmosphere in a new city. I walk down a small alley, into the small house, and then into your daily life. Here in our small house – La Maisonnette, cheers to our ordinary but beautiful life.

Roaming in Taitung City to look for the recommended drinks, you see a bright small circle signboard reading “Day Break,” welcoming every traveler with its warmth. Through the door, you walk into the small yard, seeing the squares of yellow light contributing to the atmosphere of a home. The cordial host steps forward, greeting you with an amiable smile. Here it is—the city of the sun welcoming every traveler.

ISSUE 04
Wanna Have One Every day! Life Delight of Your Choice: The Past and Present of Taiwanese Boba

ISSUE 06
Wanna Have One Every Day! Customize Your Tasty, Chewy Beverage with Add-ins Beyond Your Imagination